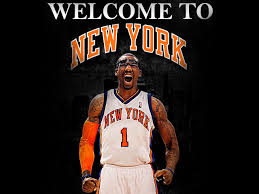 Photo from http://www.basketwallpapers.com
Amare Stoudamire was supposed to save the Knicks. Now he is holding them back.

When the New York Knicks made the decision to sign Amare Stoudamire to a five year, $99.7 million dollar contract in July of 2010, it was absolutely the right thing to do considering the direction the Knicks were trying to go.  Former President Donnie Walsh already had Head Coach Mike D’Antoni in place and reuniting Amare with D’Antoni made perfect sense. Knicks fans were hungry for change, and when LeBron spurned them, the organization felt like they needed to make a splash.

And in the beginning… Amare was a tidal wave…

78 games played in 2010-2011. 25.3 points per game on 50% shooting. He controlled the paint with 8 rebounds per game (2.5 offensive) and 2 blocks per game. He shot 79% from the free throw line on just under 8 attempts per game. He was an MVP candidate on the “New” New York Knicks. The final piece of the puzzle fell when the Knicks acquired Melo from Denver, and BOOM! The Knicks make the playoffs for the first time since 2004 (when they were swept by the Nets, led by Kenyon Martin and Jason Kidd. Fun fact).

But in the end… the only number that mattered was 36.8.

That was Amare’s minutes per game that season. The wear and tear of exactly 82 games took its toll on his already surgically repaired knees.  The 2010-2011 season will probably be the last time we ever see Amare Stoudamire play quality basketball for the Knicks or anyone else for that matter. Since then he has played in 47 and 29 games in consecutive seasons. He is currently out of the lineup for the Knicks and it doesn’t look like he is coming back any time soon.

Amare is absolutely killing the team when it comes to the salary cap. The Knicks still owe him $21.7 million dollars next season and $23.4 million dollars the following season. He made $19.9 million dollars to play 29 games this season as a bench player for the Knicks. He started 0 games. None.

Photo by Jennifer Pottheiser/Getty Images
Carmello Anthony and Tyson Chandler would not be in Knicks uniforms if Amare Stoudamire didn’t sign in 2010.

The best move the Knicks made in recent years was to sign Amare Stoudamire. At the time of the signing, it immediately made the Knicks a relevant franchise again.  It legitimized the Knicks as a contender in the Eastern Conference and gave them the confidence to go ahead and trade their young talent to Denver to get Carmello Anthony. I don’t believe that the Knicks go get Melo if they didn’t have Amare there first (that’s a whole other argument).

Where the Knicks went wrong was the 2011 off season. The Knicks knew about Amare’s knees, yet went ahead and used their newly acquired Amnesty Clause that was negotiated into the new CBA by the players association on Chauncy Billups’ contract that would have expired after the season anyway. Yes, they were able to sign Tyson Chandler because of it, and he ended up being the Defensive Player of the Year in the NBA, but they could have made this happen without using thier reprieve.

Looking back, this is what the Knicks should have done. Instead of re-signing Billups for $14.2 million dollars prior to the lockout, they should have simply let him go as a free agent. That would have left them with hole at point guard, however, it would have allowed them to sign Tyson Chandler and still keep that Amnesty Clause in their back pocket.

They should have known that the Stoudamire contract was going to end this way because of his injury history. It was a chance they needed to take in order to get where they want to be, but as soon as they found out that they were going to be able to shed one contract without penalty, they should have immediately thought of Amare’s knees and his $20+ million dollars. Now the Knicks are stuck with Amare until the 2014-2015 season is over. Even worse is that Carmello Anthony will have to play out his prime years with the Knicks without a true superstar as a compliment because they will never be able to afford it.  The Miami Heat are already better than the Knicks, and with Amare Stoudamire’s contract holding them back from getting another superstar, it doesn’t look like the Knicks will overtake them anytime soon.