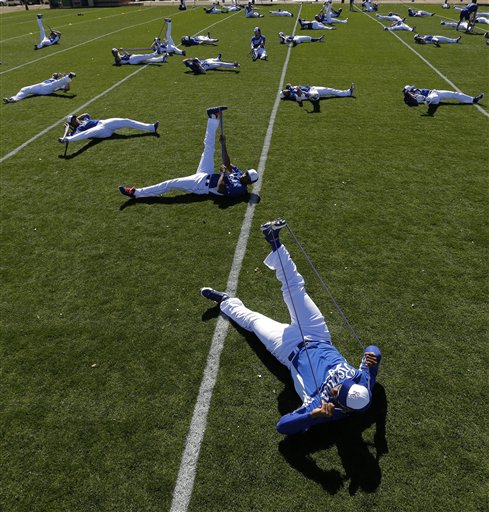 Don’t look now, but the Kansas City Royals are undefeated through 10 Spring games.

I know, it’s the Royals. The doormat Royals that everybody snickers at. The same Royals who haven’t been to the playoffs since the Reagan administration. But hey, the Royals think they’re ready to win, and for the first time I can remember, their roster actually reflects that.

Admittedly, it’s not like KC is building off of previous success. The Royals were 72-90 last year, finishing third in a cutthroat AL Central. The most valuable takeaway from last season was that it was another season for their young talent to develop.

The youth of this team has people thinking success cannot only be obtained, it can be sustained. Their young core of Salvador Perez, Eric Hosmer, Alcides Escobar, Mike Moustakas and Billy Butler combined for 301 RBI last year. All five of those players are also aged 26 or younger. They hope to grow and increase their consistency this year, improving on a 2012 season that had KC finish 20th in total runs.

But the real eyebrow-raising in KC comes from the mound. The Royals made a huge move, possibly a defining move, when they sent megaprospect Will Myers to Tampa in exchange for pitching. James Shields and Wade Davis solidify their rotation, but this move will be scrutinized heavily over the next few years. Myers will most likely start the season in the minors, but expect a Trout/Harper-esque explosion when the Rays finally call his number.

If you’re reading this, you’re ahead of the curve. Because the Royals will start hot on Opening Day, and their start will be comparable to the Pirates in the first half of last season. So go tell your buddies, and watch them smile. Because knowledge is power, and Humble Pie is scrumptious on a summer day.

If you can hear the rumblings, it’s not because of Mike Trout’s tummy.

We stand just 33 days away from Opening Day, still plenty of time to evaluate before you do any serious betting or fantasy drafting. But if you’re sitting on the first overall pick, Does 30 pounds make a difference?

You’ve probably seen them already. Tweets about late-night calzones, or stories about Trout eating ½ dozen burgers at a time at his fave spot, Jim’s Lunch. Mike Trout added somewhere around 30 pounds in the offseason, showing up to Spring Training with his gut peeking out from under his shirt.

Ok I made that last part up.

Let’s clear the air on this one. Mike Trout is still only 20 years old. It is not uncommon for a 20 year old male to eat his weight in cheeseburgers (Insider Info), especially at a legendary burger shack like Jim’s Lunch. Seriously, the place is a classic. Take the drive.

Let’s not forget that Trout has also been measured at nine percent body fat. The kid is in ridiculous shape to begin with, and if he wants a little stability to his frame I don’t think anyone would complain. You know who was a freak talent at 240 pounds with that kind of speed? Bo Jackson. Trout doesn’t “Go like Bo”, but he did have 49 steals last year, a huge factor in his outstanding run production.

He also caught a 550 pound grouper in the offseason. So you DEFINITELY don’t want to draft him.

Truth is, Trout’s still a growing boy, and these changes are going to happen. He said he put on the weight because he was going to lose it in the spring anyway. But 30 pounds? 30 pounds in 30 days seems crazy even if you were working with Shaun T.

Trout was nearly the MVP last year, and now he’s Josh Hamilton with him in the lineup. It also means he’ll be moving to left field, where his weight matters even less. He’s going to be fine, he’s going to smack 30 homers, and this still won’t be the last article about his weight.

Since about mid-December 2012, the “Scorecenter” app on my Smartphone has gone out of its way to let me know that on Saturday, February 23rd the New York Yankees will be playing a spring training game against the Atlanta Braves. This is some fine and dandy stuff. By simply highlighting the fact that I’m a fan of several teams through the app itself, it then proceeds to keep track of their current and upcoming schedules. Technology, you beautiful, majestic, 4G songbird.

Time passes. Seasons begin and end. Before I know it, it’s February 22nd and I’m seeing promos for the upcoming NASCAR series at Daytona, which we could all do without. Confusion and those heavy sweats begin to settle in nice and deep-like. Seemingly every year, the start of Major League Baseball’s “Grapefruit League” sneaks up and bites me right in the feels. Why is this the case? I get my daily servings of ESPN and its varied choices of programming. I watch a balanced diet of sporting events across all major networks. How does something as fun as this league go unnoticed under the watchful eye of an avid sports fan like myself? Come October, the MLB has no problem running those horrendous playoff promotions with “Written in the Stars” blasting on repeat. You’re better than this, Major League Baseball. At least hook the fans up with some Prince to get ‘em out of their seats. There’s no such thing as too much “Raspberry Beret”.

The Grapefruit League is a fun, family-friendly season that needs more exposure. Not only does it offer that beaming Florida weather that folks up here in the Northeast couldn’t be more jealous of, but it acts as a technical first-look at moves made during the offseason. Josh Hamilton is now an Angel, Jose Reyes a Blue Jay, and Nick Swisher an Indian (not to be taken literally). People want to see this sort of action and the MLB needs to do a better job at promoting this goldmine that they’ve been sitting on. Weeks prior to the start of even preseason training, give the Grapefruit League half of the airtime ESPN dedicates to the “This is Sportscenter: Swedish Chef” commercial and attendance will spike.

Broadcast advertising aside, there are other ways to reach this audience aside from a 10-15 second spot on the YES Network. Get creative MLB! People simply need to know of this great opportunity to vacate the desolate, freezing other parts of the US while being able to enjoy such a classic American pastime.

I’M YOUR DEMOGRAPHIC. I WANT TO FEEL MY PALE SKIN BURNING IN THOSE BLEACHERS UNDER THE FLORIDA SUN. I WANT TO SEE MARIANO RIVERA TAKE THE MOUND AGAIN. ICE-COLD LEMONADE WOULDN’T HURT.

How could the MLB market the Grapefruit League more effectively? What are your thoughts? Leave a comment below or tell us what you think via Twitter at @TheOrangeWedge.